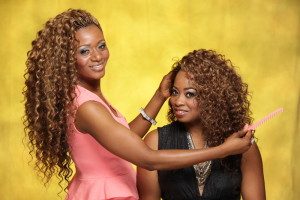 handed down from generation to generation in Africa. The origins of the art form can be traced back to Egypt as far as 3500 BC. Each region of Africa has its own traditional styles, and each tribe its distinctive aesthetics. In many West African countries, hair braiding developed into complex patterns signaling one’s social status, age group, and village affiliation. Certain elaborate hair treatments were reserved for ceremonial occasions—weddings and other rites of passage, for example. While braided hair is principally a women’s fashion and art form, in some areas men also create and wear these styles.

From a very young age, girls in the village wear their hair styled into braids or knots. Girls first have their hair done by older female relatives—sisters, mothers, grandmothers, cousins, aunts. They learn first by watching, then by doing. A girl just developing these skills will usually practice on her peers or on younger girls, since no one wants to have her hair done by someone younger (and, therefore, less adept) than she.

Hair-braiding is often an immensely time-consuming activity: some styles can take an entire day or more to create. Among those who have already mastered the art, there is an informal reciprocity to the practice: if someone braids your hair, you are expected to braid hers in return. But the practice of such an intricate traditional art depends on the ample leisure time available to those living in rural and village communities. In the wake of urbanization and industrialization, hair-braiding has in part been turned over to professionals. While the more complex and intricate braided styles may still be found in village settings, salons offering the simpler of the traditional braided styles have become commonplace in Africa’s urban areas. And over the last two decades, braiding salons have also sprung up in many urban areas in the United States.

Because braiding takes so much time, it offers women an opportunity to socialize together. In Africa, having someone braid your hair is also a sign of the friendship, confidence, intimacy, and good will you share. In most salons, braiders and customers alike—talk and laugh together, watch videos and listen to music, and generally entertain each other during the long hours of braiding. This salon socializing recalls the informal sociability that women in Africa share at home while performing this service for one another.

Book your visit online and save 10%